I recently returned from a vacation to Croatia. In Dubrovnik, in a restaurant called Lady Pipi, I ate some of the best grilled meat and seafood of my life. I won’t bore you with details of a restaurant you probably won’t have the opportunity to eat in anytime soon. Although I will mention that it calls itself Lady Pipi because of a semi-pornographic statue of a lady pissing into a fountain that stands outside the restaurant. 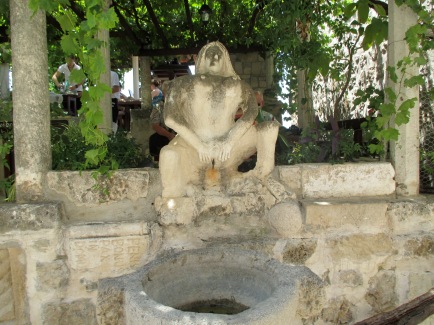 I was so inspired by my meal there, I decided to reproduce it at home. Ćevapčići are casing-less sausages spiced with paprika. They’re eaten all over the Balkans with ajvar, a roasted red pepper and eggplant paste, also known as Serbian caviar. The Ćevapčići from Lady Pipi were sublime: tender and a little spicy, cooked in a wood-fired outdoor oven, and made from locally sourced ingredients.

The following recipe makes enough to serve about eight people. We had three people and were eating leftovers for three days. They’re small but very dense and I was full from eating just three of them with grilled vegetables, ajvar, and pickles. Serve with a bottle of Dalmatian red wine and gorge yourself until you can’t stand up anymore.

1.) Over an open flame on a gas stove, char vegetables carefully until the skins are black and blistering.

2.) Rinse skins off under the sink or peel off. Remove the seeds.

3.) Combine vegetables with salt, pepper and paprika in a food processor. Whiz until combined and the vegetables are chopped up to the texture you desire (some like it chunky, others smooth.) 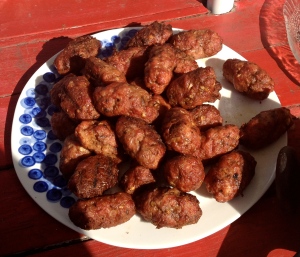 1.)   Light a hot fire in your grill and wait for the flames to go down.

2.)   Combine pork, beef, and lamb with the egg white and mix with your hands until combined. Add garlic, salt, pepper, baking soda, cayenne, and paprika. Mix again with your hands.

3.)   Form into sausages about the length of your index finger and 3/4ths of an inch wide.

4.)   Oil grill and place sausages around but not on the heat source. Cover the grill and cook for a half an hour, or until cooked through, turning sausages once throughout cooking.

I enjoy the semi-mystical transmogrification that comes from pickling. From out of the misty, swampy, dilly brine the cucumber becomes the pickle. I am the alchemist and the millions of microbes doing the fermentation are the elements of nature I manipulate with my magical powers.

For this recipe I mixed together orange, purple, and white carrots. The purple bled out, making the brine turn burgundy. I love the way the colors change day by day and listening to the bubbling brine as I go about cooking for the week. This pickle is fermented with the cap on, which means that it carbonates, sometimes ferociously. In order to prevent the jars from exploding you just have to unscrew them for a few minutes every day. That should keep the bubbles calm.

1.) Chop carrots. This may take awhile.

2.)   Make brine. Filter water and dissolve salt in it. 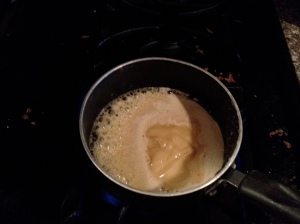 5.)   Pack carrots into jars and pour in cooled honeyed brine. Add  more brine and fill until the carrots are covered. Remember to leave a decent amount of space between the liquid and the cap. This prevents explosions.

6.)   Weigh carrots down to make sure they don’t float to the top. This may happen over time as they become more buoyant. Discard any carrots that manage to float above the brine.

7.)   Allow to ferment at room temperature for 5 to 7 days, uncapping them for a minute or so every day, until the carbonation has stopped. 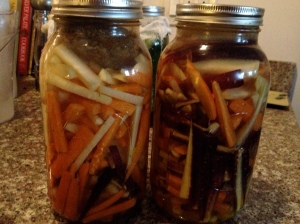 Back when my boyfriend lived in the East Village and we were broke graduate students with no clue how to cook, we ate a lot of cheap Indian food. Curry Lane was just around the corner and the thirty identical Bengali joints with their chili pepper lights and sitar players, their tooth-achingly sweet lassis, and cheap booze suited our purposes nicely.

The food at these places tended to be of the order of a few chunks of poor quality meat floating in a soup of curry sauce, served with gummy naan, and accompanied by a Kingfisher or rotgut red wine. I soon learned that vegetarian dishes at these places were a lot better than their meat dishes, and the malai kofta the best of the vegetarian curries. These are vegetable dumplings with potatoes, peas, carrots and other things globed together into balls and cooked in a curry sauce. This became my Curry Lane favorite and I rarely diverged from it.

We haven’t eaten on 6th Street in years. Good Indian food is hard to come by in general, and especially in Brooklyn. Why someone doesn’t open up a locavore Indian restaurant in Park Slope, I have no idea. It would be a huge hit. But for now I’ve got to do my own Indian cooking.

I found this recipe in Simon Hopkinson’s Second Helpings of Roast Chicken. Colonialization rears its ugly head again as I learn Indian cooking from an Englishman. This dish is not vegetarian, but made with ground lamb and a thousand times better than the greasy veggie dumplings I ate on 6th Street.

Adapted from Second Helpings of Roast Chicken by Simon Hopkinson

This recipe appears simple. It’s not. It’s serious down home slow cooking so set aside a few hours for it. Just browning the onions and shaping the koftas took me over an hour. Worth it, of course, and it makes a huge amount that can be frozen if it’s not eaten immediately, but I don’t recommend it for one of these ninety-seven degree days we’ve been having.

1 14-ounce can of coconut milk

1.)   Dry roast cumin and coriander seeds together until fragrant, then grind in a coffee grinder or mortar and pestle.

2.)   Fry onions and garlic in fat until golden brown. Cool.

4.)   Form into balls the size of walnuts and roll in flour. 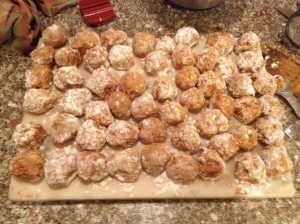 5.)   In a large shallow pan (or two pans as pictured below) “quietly” fry koftas in butter until browned all over. Use two spoons to turn them. 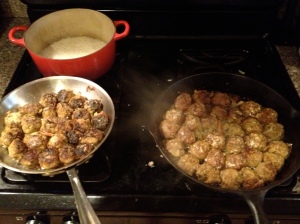 6.)   Put in cinnamon, cloves, and cardamom and fry for a minute.

8.)   Add lime juice, mint, stock and coconut milk. Bring to a simmer and cook for about twenty minutes, or until the coconut milk is thickened. 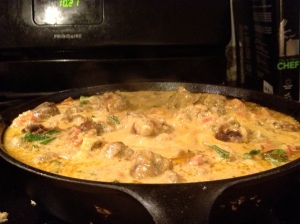 9.)   Season and serve with jasmine rice.